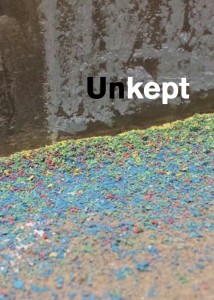 “How could I have known that the snow wouldn’t melt, that plants wouldn’t grow, that what I breathed wasn’t clean or that I’d miss the sight of running water? I certainly didn’t think that the air would hurt my skin.” – Jessie Lumb[1]

Unkept brings together the work of Jessie Lumb and Claire Kroužecký, both early career Australian artists whose practices are led by humble beginnings and chance occurrences; through ‘paying attention’ to sites and materials that might be considered commonplace or everyday. Lumb describes herself as an “obsessive observer of the little details that make up our world” and Kroužecký draws her inspiration from “light-based and atmospheric phenomena observed in everyday situations.”[2] Together, these artists show us the unexpected.

Naming the exhibition presented some unanticipated challenges for the artists and, if I’m honest, for me too. These concerns were discussed openly and later resolved on a blog begun in early 2014: http://unkeptconversations.blogspot.com.au. This title challenged my understanding of language and meaning. A name with two parts: ‘un’ and ‘kept’ that was opposite to ‘well-kept’, a word not recognised by Microsoft Office as correct, often confused with ‘unkempt’ and a title that presented negative connotations. Unkept is the name I chose because after saying it, it seemed to carry in the wind, lingering in my mind, like the vision of Lumb and Kroužecký’s dust works that were the catalyst for this exhibition.

Unkept invites the viewer to experience how these artists see the world around them. As French-Lithuanian poet Oscar Vladislas de Lubicz Milosz said, “The world wishes to see itself; the world lives in active curiosity with ever open eyes”[3], as if waiting for transformation. By responding to their everyday surroundings Lumb and Kroužecký bring out the beautiful in the mundane, engage with what often goes unnoticed and draw our attention to forgotten – almost invisible – sites and materials:

…the musty odor of the minutes of three centuries ago; the secret meaning of the hieroglyphics in fly-dung; the triumphal arch of that mouse-hole; the frayed tapestry against which your round, boney back is lolling; the gnawing noise of your heels on the marble; the powdery sound of your sneeze… and finally, the soul of all this old dust from corners forgotten by brooms.[4]

The artists ask the viewer to take a moment to see the ever-present texture, luminescence and transience of our lived environments. Where cracks become rainbows and dust glistens…

Built on a binary framework, the exhibition explores ideas of duality and opposites: kept and unkept, inside and outside, visible and invisible, absence and presence, full and empty, light and dark, clean and dirty, earth and sky. This catalogue reinforces the pattern of duality; Sera Waters writes on Jessie Lumb, Lucy Bleach writes on Claire Kroužecký, while I write to bring together the two artists and the two installations. Looking closely, I have noticed that Lumb chooses to work with sites that often draw the eye downward to the ground – to cracks, puddles, potholes and bubblegum stains. For Kroužecký, she draws the eye upward to the sky – to birds and kites, to natural phenomena like rainbows and sunlight. This reminds me of Raphael’s famous fresco The School of Athens c. 1509-10 with its central figures: Aristotle gesturing to the earth and Plato pointing to the heavens.

Unkept comprises two works that feature dust; Lumb’s installation The brilliant texture of small town life[5] and Kroužecký’s video installation, Dust[6]. Both works indicate an unusual juncture for the artists’ oeuvres wherein they both draw the viewer’s attention to what is directly in front of you, to the very surface of the wall – to ‘middle space’ (a Postmodern construct) – to being consciously aware of the air, of your breath and movement.

I first experienced these ‘dust’ works differently. My original viewing of The brilliant texture of small town life was via a jittery, pixilated Skype video image, while I experienced Dust in a gallery environment. Both works initially surprised and then later stuck with me; each reminded me of the other and I was compelled to experience them together. These two dust works tell a story of banal and lowly materials elevated to a place of intrigue.

The Unkept projectoffered an opportunity to develop site-specific responses to the Contemporary Art Tasmania gallery space and surrounding area. The conversations began over a year ago, followed with periods of concentrated and considered time in and around the gallery space. The discussions carried into email correspondence, Skype calls and eventually became a blog whereby I introduced the artists, who had not previously met, to the numerous connections and crossovers of their practices and creative approaches. In times past, conversations have instigated manifestos, founded art movements and sealed allegiances and here words written and spoken led to experimentation, collaboration, and the physical manifestation of Unkept.

Transoceanic Whistle, the collaborative sound work was initiated through correspondence. First recorded as a note jotted down during a Skype conversation with Kroužecký; 12/05/2014 9:19am: “artist attempts to whistle”. At the time we were discussing how one might communicate back home, via the wind – what could be made of the distance between the artists, particularly with Lumb’s presence and Kroužecký’s absence – a calling out, a relaying of sound. While Kroužecký attempted to whistle we became aware of sound itself in both its presence and its absence. Then in a post on the blog, 28/05/2014 4:02pm Kroužecký asks “Hey Jessie… can you whistle?” and it emerged that both artists cannot whistle. Transoceanic Whistle is a dialogue between the artists, where both try to whistle to each other “as a response to and communication across the physical distances currently between us.” – Claire Kroužecký[7]

My curatorial approach was guided by the following directives: open dialogue, collaboration, site-responsiveness, as well as finding the point of difference within the contemporary art landscape of Tasmania and tapping in to it. What has been vital in the development of Unkept has been finding the balance between being decisive and staying true to the original concept, while still providing the artists space to think, breathe, create, interpret and share freely. For me, curating is essentially about making decisions. Like deciding on the name, deciding on the works, the artists, the themes, the public program, the design, the writers, the installation, the lighting, the labeling, and the overall look and feel of the exhibition. The origin of these big decisions was a small decision: to notice dust.

The artists response to the everyday, to natural phenomena, to conversation, to collaboration and a ‘paying attention’ to the world around them has led us to this place where what was unkept is now kept… just so. This exhibition invites the viewer to take some time to look down, to puddles and potholes; to look up, to the sky and sun; to listen to wind, and to see all the vibrant, textured beauty of the fabric that makes up the spaces we occupy in everyday life.

Women walk by in the street, different from women of the past, because they are Renoirs, those Renoirs in which we once refused to see women at all. The carriages too are Renoirs, and the water, and the sky.[8]