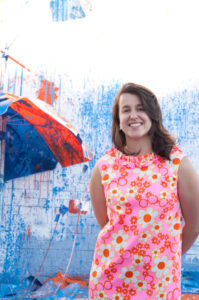 POLLY DANCE is a curator, arts writer and artist based in Adelaide. Her practice is concerned with modes of communication, curation and materiality. She has an ongoing curiosity in archival and local history research, and has undertaken a number of creative ventures to retell the stories of our past. In 2012 she graduated from the University of Adelaide with Masters in Curatorial and Museum Studies. Prior to this, she completed a Bachelor of Visual Art (Honours), specialising in History and Theory at UniSA. Major curatorial pursuits include PAINTFACE presented by Constance ARI, The Writing Project at FELTspace and CACSA@70 Archives: Gathered Histories during the South Australian Living Artists Festival at the former Contemporary Art Centre of South Australia (CACSA). Dance has been published in Real Time, Artlink, dB Magazine as an arts review writer, Vitamin – The Redux, PLATFORM: Youth Arts & Culture Magazine and Point Blank as Editor. She was the 2015 Emerging Curator at Adelaide City Council, in the same year she had her first solo exhibition called What is in a name? at Archive_ ARI, Sydney. In 2017, she joined forces with Adelaide artist Heidi Kenyon to create the Fight for Self Collective, facilitating public forums and artwork together. She is currently working with City Archives as a Curator at the Adelaide City Council.